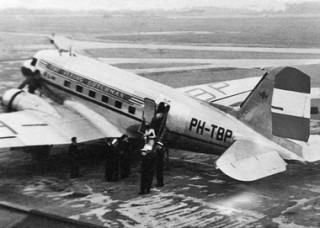 After the ending of the Second World War in the autumn of 1945, KLM immediately started to rebuild its network. Since the Dutch East Indies were in a state of revolt, Plesman’s first priority was to reestablish KLM’s route to Batavia. This service was reinstated by the end of 1945. Domestic and European flights resumed in September 1945, initially with a fleet of Douglas DC-3s and Douglas DC-4s. On 21 May 1946, KLM was the first continental European airline to start transatlantic scheduled flights between Amsterdam and New York City using Douglas DC-4 aircraft. By 1948, KLM had reconstructed its network and service resumed to Africa, North and South America, and the Caribbean. Long range pressurized Lockheed Constellations andDouglas DC-6s joined KLM’s fleet in the late 1940s; the Convair 240 short range pressurized twin engined airliner began European flights for the company in late 1948.

In 1950, KLM carried 356,069 passengers. The expansion of the network continued in the 1950s with the addition of several destinations in western North America. KLM’s fleet expanded as well with the addition of new versions of the Lockheed Constellation and Lockheed Electra, of which KLM was the first European airline to fly.

On 31 December 1953, the founder and president of KLM, Albert Plesman, died at the age of 64. Fons Aler succeeded Albert Plesman as KLM’s president. After the death of Plesman, the company and other airlines entered a difficult economic period. The conversion to jet airplanes placed a further financial burden on KLM. Besides all this, the Dutch government increased its ownership of the company to two-thirds, and thus hereby nationalized the airline. The board of directors, however, remained under the control of the private shareholders.

On 25 July 1957, the airline introduced its flight simulator for the Douglas DC-7C – the last KLM aircraft with piston engines – which opened the transpolar route from Amsterdam via Anchorage to Tokyo on 1 November 1958.[8] Each crew flying the transpolar route over the Arctic was equipped with a winter survival kit, including a 7.62 mm selective-fireAR-10 carbine for use against polar bears, in the event the plane was forced down onto the polar ice.[13]